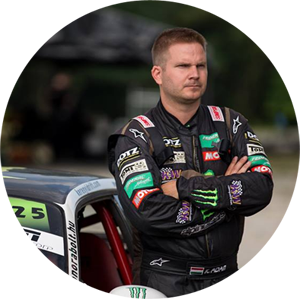 Adam was born on 25th September 1979, in his private life he works as an economist in his own company. He likes cars, motorcycles and dogs.

He was involved in motorsports at 5 years old. His father taught him to ride a motorbike, then at the age of 8 Janos Kesjar taught him how to drive a gokart as fast as possible, so the basics of driving came from a great teacher. Temporarily he quit riding motorbikes but wants to be back on closed tracks with a hobby racebike. He started to drive RWD cars on amateur races and slaloms back in 2003 and since 2006, he has participated in many Hungarian and European drift races. During his racing history he managed to win the Hungarian Championship 2 times and the King of Europe Pro series for 3 times.